skip to main | skip to sidebar

Gulshan-Banani and Gulshan-Baridhara lakes of Dhaka (Bangladesh) have been encroached by real estate developers, retired government officials, a former UN official, a ward commissioner and even a sitting judge of the HC. Despite a HC stay order, the encroachers are filling up the Gulshan-Baridhara lake and also building boundary walls on it. The Rajdhani Unnayan Kartripakkha (Rajuk), who is the caretaker of the water bodies in the city, is sitting silently on this matter. According to the news source, the lake has been identified in the Dhaka Metropolitan Development Plan (DMDP) and the layout of the lake is in accordance with the Wetland Conservation Act.

For details of this news and the picture see the site:

Posted by lakewarriors at 9:36 PM 2 comments:

Posted by lakewarriors at 1:53 AM No comments: 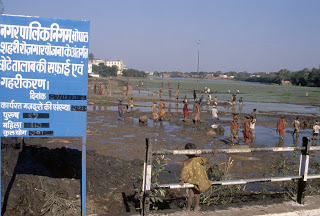 You people out there pl. post photographs from other lakes
Posted by lakewarriors at 1:21 AM No comments:

Gandhari talab, in Parikshitgarh in Meerut district of UP, is not only important for its historical or mythological background but also can contribute to groundwater recharging. It is said to have been used by Gandhari, mother of the Kauravas in Mahabarata age. Whether this lake really belongs to the Mahabharata age is a topic of debate. The most important object is that this surely acted as a source of water in the neighboring areas. NGOs and the stakeholders came together in 2005 to revive it. But the present condition is again sorrowful.

Read more.....
http://www.rainwaterharvesting.org/newsletter/gandhari_talab.htm
Posted by lakewarriors at 12:37 AM No comments: